Here's the guy that wants to take over the reigns of the state school system to reform and reflect his more conservative agenda. Rep. Don Pridemore's behavior is a party phenomenon that is more the rule now and not the exception.

Pridemore, like every other right winger, feels entitled to special treatment, because after all, they're the real Americans. 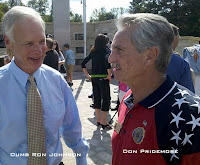 Urban Milwaukee: Rep. Don Pridemore, the Republican assembly representative who is vying with incumbent Tony Evers to be the State Superintendent of Public Education, was ejected from the polling place at Washington High School during the November 6th, 2012 general election. According to “Wisconsin Election Protection,” a report from non-partisan observers of voting during the presidential election:


“State Rep. Don Pridemore (Hartford) was ejected from the site for repeatedly interfering with the voting process and refusing to obey the Chief’s multiple requests to stop his disruptive behavior.”

Undaunted, and with the defiance you’d expect from the kid kicked out of class for misbehaving, Pridemore included Washington High on his “Common Sense Conservative Reform Tour” campaign kickoff on December 4th, 2012, which sends a message more of pugnacity than tenacity.