Just Another Legal Gun Owner in the Middle of the street Shooting at Cars, and Killing a 9 year old Boy.

The following gunman-kills-child story is a daily event in this country. Why? Because we’ve conditioned people to think more casually about gun use in society, whether for protection, or letting off a little steam:


An Oakdale man, Nhan Lap Tran, 34, shot at random vehicles Monday, resulting in the death of young 9 year old Devin Aryal. Devin died from a gunshot wound to the head. Two female victims, including Devin's mother, were also hospitalized with gunshot wounds. Two others had gunshot assaults to their vehicles.

The nightmare becomes a reality: 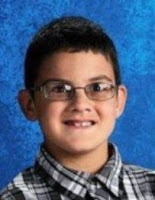 Tran stood in the middle of Seventh Street near Hadley Avenue and opened fire with a 9mm handgun on passing motorists.

During the episode, Devin Aryal was fatally wounded, and his mother, Melissa Aryal, was also wounded.

Another driver, 68, was also wounded. She was shot in the hand and in the leg, where her finger was ultimately amputated as a result of gunshot wounds. The woman had her three grandchildren in the vehicle at the time of the shooting who were unharmed.

Tran has no criminal history. There are no indicators that Tran was under the influence of drugs or alcohol or that he has mental health issues. Police also believe that Tran owned the gun legally.