If you’re living anywhere near a frac sand mining operation, then you’re probably concerned about your chances of getting cancer.

In an odd moment of sanity, Gov. Scott Walker has decided those concerns are justified.

WPR: Governor Scott Walker is asking the legislature for money to help monitor air quality at frac sand mining operations. The DNR says there are four technicians in the west central region and compliance checks at sand mines are rare.

But wouldn't you know it, there are science deniers/corporate whores who think such concerns are ridiculous (side note: Republicans don’t feel the same about the unproven negative effects of inaudible wind farm noise levels. That’s enough to stop the whole industry.) 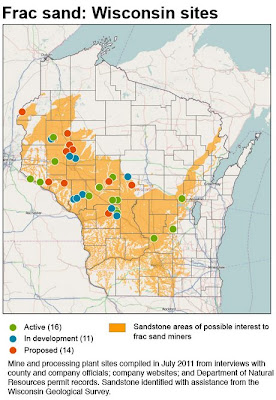 But some of his Republican colleagues are skeptical of the request. One of the main concerns about frac sand mining is blowing silica dust, which is a known carcinogen. But Republican state Representative Scott Suder says he's skeptical when any agency asks for additional staff. "It has not been shown to me by the DNR, and I have asked them, why they need those additional two positions when they do have individuals in the agency that perform that testing. If the need is there, if there is an actual health concern or if they are overburdened and they don't have enough, then I can stomach it.”

Since sanity left the party a long time ago, good luck with that request Scotty.
Posted by John Peterson, Democurmudgeon at 2/26/2013 09:55:00 AM