Every once and awhile, right wing propagandist Sykes thinks logically. Like when he asked this question of guest Scott Walker: 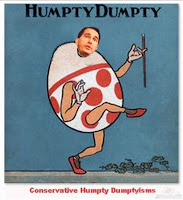 jsonline: Sykes also asked Walker about his decision to turn down federal money for expanding Medicaid health services. By instead moving some people onto health insurance through the federal health care law, wasn't that keeping those people dependent on the government, Sykes asked.

Walker said it's better than being dependent on Medicaid, in part because it costs the state so much.

But Walker didn't like Obamacare, and wanted to have nothing to do with it?

Plus, the government will be heavily subsidizing premiums for those getting kicked off Medicaid anyway, which still makes them dependent, right?

Walker goes further, by inadvertently praising Obamacare as a way to get off government dependence:

And he said it's easier under the federal health care law to transition into traditional private health insurance and off of the government's help.

I think the Root River Siren said it best:


In an instance of classic narcissistic behavior disorder, Walker told the crowd that some would portray his decision as not caring about the people of Wisconsin - but the opposite is actually true - he cares TOO MUCH for people to allow them to become dependent on shit like doctors and you know...health care without going bankrupt.