Isn’t it odd how Republicans like Scott Walker can just replace someone with Sec. of Health Services Dennis Smith recent high visibility, the guy who trashed Medicaid’s expansion, without giving even a hint as to why? 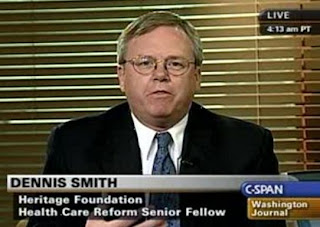 WSJ: Dennis Smith, secretary of the state Department of Health Services, has resigned, Gov. Scott Walker announced Friday. Walker named deputy secretary Kitty Rhoades as secretary. Walker's announcement didn't say why Smith resigned or what he will do next.


Smith’s resignation letter is dated Thursday and says he was leaving for a “tremendous opportunity in the private sector at another outstanding organization effective March 1.

Just like that? Smith wanted out? Walker wanted Smith out? Did the following from August play a roll?


State Secretary of Health Services Dennis Smith on Tuesday "categorically and unequivocally" denied having an affair with the department's top lawyer, an accusation that surfaced when the woman's husband was charged with trying to kill her by burning her with gasoline. "I categorically and unequivocally deny that I have ever had a relationship with Mary Spear beyond friendship," Smith wrote in the statement … (he said) he would make no further public comments about the matter.

And like a typical conservative, didn't, and was never asked again. The media seems conditioned to go along with these nonsensical statements. And now this happens, and all the media can do now is kick themselves for not asking why a woman nearly died from being burned to death, all over a supposed false accusation? It didn't sound false at the time.

According to the complaint, she denied to her husband the affair but later told him that she loved him and was sorry that she had lied to him.

Two more things: Many readers searched this blog for stories relating to our new Sec. of Health Kitty Rhoades, and there was one. Doh! I forgot. Here's a link to it. You won't believe what she said. She's nuts too.

Conservatives have a way of "saving" social safety nets by throwing more people off of them, by shrinking them, by cutting their spending and reducing their political workload.


Smith praised that proposal in his resignation letter, saying the idea will “stabilize the Medicaid programs for our most vulnerable citizens and give the department the tools necessary to secure these programs and set them on a path to sustainability.”