With the advent of 3-D printers, that can create plastic replicas for guns that work, may be a way around large capacity magazines, if a ban goes into affect. Of course it would be illegal, so I'm sure there would be a fine and prison time for making them, but killers won't give a damn because they eventually only kill themselves after the thrill starts fading. 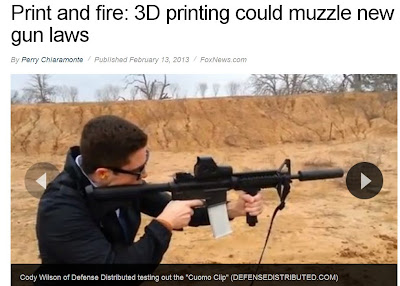 Fox News: Gun owners who can't buy high capacity ammo magazines because of new laws have another option: Print them.

But the laws are at least one step behind technology. Using 3D printers and schematics available on the Internet, gun owners can manufacture a fully functional, plastic magazine clip. Plans are free, although getting access to a 3D printer may prove expensive, at least for now.