While Gov. Scott Walker spends Wisconsin's taxpayer money on upgrading and rebuilding our aging rail system, money we could have saved had Walker taken the high speed rail deal, Illinois is about to see a boon in business growth due to faster trains. From WKOW:

This was a boondoggle alright, one of Walker's biggest job killing mistakes: 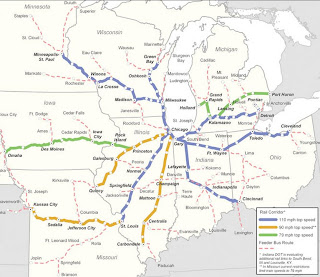 "What we're seeing is that old-line Rust Belt manufacturers are making the equipment for modern new rail cars," the group's director, Howard Learner, told The Associated Press. He said the "extraordinary" number of companies they found in the supply chain was nearly double what he expected.

While Scott Walker stiffed train manufacturer Talgo, others are picking up the business:

The U.S. subsidiary of Nippon-Sharyo, the maker of Japan's bullet trains. Its plant in Rochelle, Ill., will build 130 double-decker rail cars for high-speed projects in Illinois, Michigan, Missouri and California.

Less obvious, though, is the business generated for those supply-chain companies identified in the policy center's report. The businesses it found are located in Illinois, Indiana, Iowa, Michigan, Minnesota, Ohio and Wisconsin.