The Republican Predator State...and going in for the kill!!!

What is it about Republicans that baffles and mystifies the media?

Perhaps it's the uneasy feeling that there may be some truth in the way their ideological opponents see them. A truth that is more human nature, than a political belief. 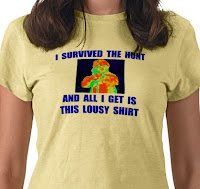 Why are so many GOP governors sinking in the polls with their draconian austerity platforms? Not including the 2010 campaign ploy of avoiding the "lame stream media's" tougher line of questioning, and a chance to reveal the Republican Party's real plans for change, we're left with one other choice. The predator state. It's an offshoot of what writer Naomi Klein describes as disaster capitalism. All the conditions are right to pounce.

Predators will always take advantage of a weakened opponent, and go in for the kill. The same is true of the more aggressive, ever on the offensive Republican Party. They play off the deeper fears of society. The "injured" economy, and the ensuing Great Recession energized their predatory instincts.

Wisconsin Republicans were able to reverse the entire eight years of Democratic governor Jim Doyle in just 5 months, all based on the global, national and statewide weakened economy. Voters were so traumatized, they never bothered to asked what solutions or "tools" were going to turn things around.

Unfortunately, we're in the early beginnings of the predator state. As long as we have a devastated public, massive unemployment, and escalating health care, the weakened power of the consumer will continue to fall prey to our political and business predators.
Posted by John Peterson, Democurmudgeon at 6/27/2011 12:13:00 PM