It's hard to know where to start with every wrong thought expressed in this Wisconsin State Journal editorial position shown here.

You would think the sudden onslaught of "rampant recalls" all by itself would tell you something is very wrong in our state. In a time before the new radicalized Republicans rose to power, when the public protested, politicians drew back and moderated their final positions. But that's what makes this "rampant recall" so telling, and this editorial so pathetic (as pictured here). 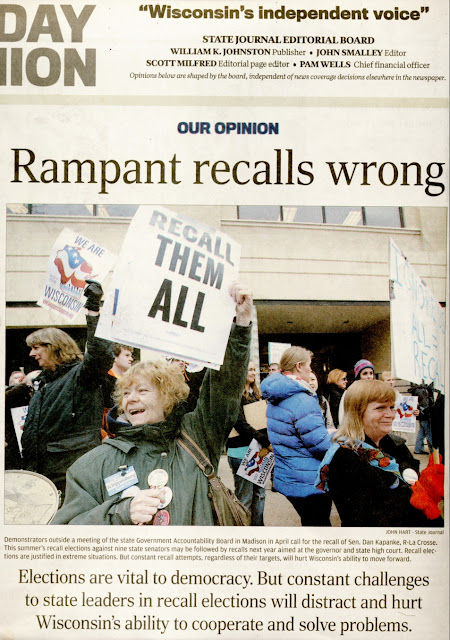 The under picture caption reads, in part: "recalls are justified in extreme situations. But constant recall attempts, regardless of their targets, will hurt Wisconsin..." Regardless of targets? When the media plays it this dumb, it's hard not to notice. This extreme Republican agenda, and everything on their partisan wish list for decades, is being passed in just 5 months. Those "constant recalls" encompasses those conservative legislators and governor pushing their hard core agenda. There's no "regardless" in the targeted politicians for recall. The editorial continues with even more insulting spin.

Union forces hope to recall Walker himself early next year. There’s even talk of launching recall efforts against the state Supreme Court justice who was just re-elected — along with other members of the court who voted to uphold Walker’s bill ... Remember: Judges — unlike lawmakers and the governor — aren’t supposed to cater to the whims of the public. They’re supposed to settle disputes as independent, impartial referees, based on the law.

Wisconsin needs to cure its recall fever … rare recall elections are justified for egregious actions, such as misconduct in office … endless electioneering that distracts and polarizes the state while discouraging hard-working public servants from seeking office.

Then politicians need to listen to the large number of protesting Wisconsinites, who took the time out of their work schedules and leisure time to voice their opinion at the Capitol and around the state, even on lakes. Most insulting is the idea that all of this is about a single issue, like collective bargaining. It's not.

Is it even possible for a newspaper to get it so wrong? This was an attack on teachers, firefighters, police, public employees; an attack on all labor rights (sick leave in Milwaukee); an attack on unions; an attack on Wisconsin's way of life (where we have higher taxes because we have a higher quality of life and great schools); and an attack on local control.

The most galling part of the editorial was this;


"...the will of the people must be respected. They have chosen their leaders, for better or for worse."

Sit down and shut, another words. Think about it; we should sit around while our "chosen" leaders make things "worse?" It's the "will of the people." This has been an uncompromising authoritarian takeover of our state, and not a rush to irrational rampant recalls.  We're not seeing reasonable governments servants, but radical uncompromising thugs.
Posted by John Peterson, Democurmudgeon at 6/26/2011 07:27:00 PM