Republican Gun Nuts Supply Violence at the Capitol where there once was none!!!

Just before the gun vote in the Assembly, a former state senator and gun nut caused a ruckus in the Capitol rotunda, for which he received a standing ovation. These are the people that will soon be carrying a loaded weapon.

Looks like the Republican whiners complaining about the nonexistent chaos and violence at the Capitol decided to provide their own disruption. 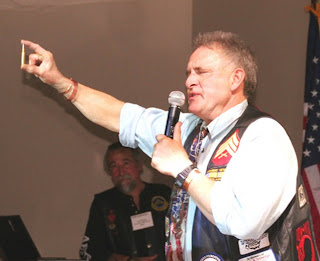 WSJ: A participant in the daily, non-violent Solidarity Sing Along at the state Capitol suffered a broken tooth when he was punched in the face by one of two men who were draping a "Don't Tread on Me" flag over the heads of singers, the leader of the sing-along said. Michael J. Dickman of Madison, saw the two men draping the flag over others and came over and grabbed it. Dickman was cited by Capitol Police for disorderly conduct … Henry C. Rahr of Green Bay was arrested on a tentative charge of battery, and another man holding the flag … Eugene German, of Shorewood, Minn., also was cited for disorderly conduct.

R. Chris Reeder, who leads the sing-along from noon to 1 p.m. weekdays, said singers were shaken by what he called aggressive and provocative behavior by people who were at the Capitol on the day the Assembly passed a bill allowing the carrying of concealed weapons. Among them, Reeder said, was former Republican state Sen. Dave Zien of Eau Claire, who was yelling and running over singers' belongings in the wheelchair he now uses following a motorcycle accident. "He was definitely being very, very aggressive," Reeder said.

Lisa Wells, who recorded video of Zien, said he was yelling, "Walker for president."
Zien received a standing ovation from Republican Assembly members when introduced as a former legislator prior to the vote on the conceal carry bill.

"It is disheartening to live in a state where someone can no longer sing or voice their opinion without being singled out and assaulted," Karen Vieth wrote. "Today's event is further evidence that Wisconsin is being ripped apart at the seam." 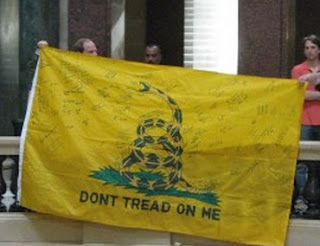 When these two men continued around the circle to where I was standing, holding my banner, I took a few steps away from the balcony edge still holding my banner as a way to prevent these men from putting their flag over me, but they continued to do it anyway.

Just as they were draping their flag across my face, a member of the sing along came over, told the men to stop it, and pulled their flag down.  instantly, the shorter tea partier grabbed this guy in a headlock and punched him in the mouth which resulted in a broken tooth. The guy who got punched did not initiate any physical force against either of the tea partiers holding the flag, he just was grabbing and trying to pull down their flag, never touching either of the men until he was trying to get himself free from the headlock. Some more sing along people came over and tried to break up the fight.  moments later the police came upstairs to assess the situation.  Several eyewitnesses including myself gave statements to the police and everyone who was involved in the assault.