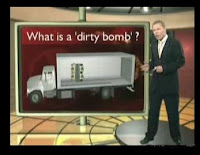 One of the little known facts about al-Qaeda, explained in detail in the documentary “Power of Nightmares” (in 3 one hour sections), was that it was on its way out as a movement. The public turned on bin Laden for killing so many Muslims. But Bush turned everything around for bin Laden, and al-Qaeda’s popularity. Had Bush treated bin Laden as a criminal, and not as the most feared and evil man on earth, who knows how things would have turned out?
So Osama bin Laden mulled changing his image.

The Scottsman: Correspondence recovered from the Pakistan compound where Osama bin Laden was killed reveals the al-Qaeda leader was considering renaming his organization in order to revive its beleaguered reputation. bin Laden, the most ardent opponent of capitalism, thought a public relations overhaul would win the hearts and minds of greater numbers of Muslims … the unlikeliest of marketing men lamented that the group's full name, al-Qaeda al-Jihad, or The Base of Holy War, had become known around the world simply as al-Qaeda, or The Base. Lopping off the word "jihad," bin Laden wrote, allowed his western enemies to "claim deceptively that they are not at war with Islam".

He went on to note several ideas for new names, including Taifat al-Tawhed Wal-Jihad, meaning Monotheism and Jihad Group, or Jama'at I'Adat al-Khilafat al-Rashida, meaning Restoration of the Caliphate Group.

Check out the masterfully produced “Power of Nightmares” for a full explanation of the their movement and where we went so wrong fighting "terrorism" as a war.
Posted by John Peterson, Democurmudgeon at 6/27/2011 10:24:00 AM

Labels: Terrorism
Email ThisBlogThis!Share to TwitterShare to FacebookShare to Pinterest