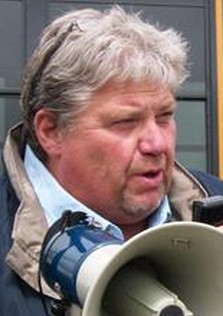 jsonline: A state advisory council voted unanimously Thursday to move forward with freeing up $89 million in federal jobless benefits for more than 10,000 unemployed state workers.
But wait a minute!!! No, to jobless benefits for needy unemployed, say a states business group and union: Screw you!
Get this; since they weren’t consulted first on providing lifesaving checks to the victims of the Great Recession, Wisconsin Manufacturing and Commerce and the AFO-CIO want you to starve…maybe lose everything.

The state's largest business lobby and union group have made an unusual move - jointly opposing changes to Wisconsin's jobless benefits by GOP lawmakers. In a letter sent this week to Gov. Scott Walker, officials from the two groups asked him to veto the action by Republican legislators in the budget bill to limit benefits for workers.

What the union was thinking, siding with WMC, is not only a mystery to me, but disappointing and outright lousy.

(They) said in a letter that they opposed the jobless program changes because they were made without guidance from the long-standing advisory council, which includes both leaders. That council has served the state for 75 years by bringing together labor and business groups to chart a course for the unemployment program, said James Buchen, the head lobbyist for WMC and Phil Neuenfeldt, the president of the Wisconsin AFL-CIO.

BFD! Kind of takes the wind out of my energized recall sails. But thankfully, my own determination is based on workers in general, and the historically beneficial effect that unions have had on labor rights and benefits.


The Unemployment Insurance Advisory Council voted 9-0 on Thursday to recommend lawmakers change the qualifying language in state law to secure another 13 weeks of extended benefits. The changes would allow Wisconsin to collect about $90 million from the federal government, which would mean $363 per week for a jobless person.

In the meantime, Phil Neuenfeldt should be trying to collect an unemployment check himself.
Posted by John Peterson, Democurmudgeon at 6/23/2011 04:25:00 PM