And now for the newly created spinganda secretly released to the conservative National Review: 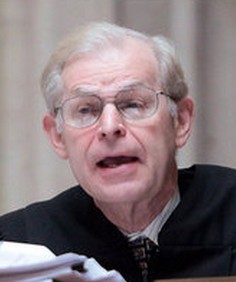 Three of the four conservative justices were ready to issue a ruling reinstating the union law as originally passed. Prosser, on the other hand, wanted to wait longer, to avoid the appearance that the court was rushing their decision through. Prosser and the other conservative justices marched around the chambers, looking for Abrahamson, who was found in Justice Bradley’s office. Prosser stood outside Bradley’s door, talking to the justices in Bradley’s office. The discussion got heated, with Prosser expressing his lack of faith in Abrahamson’s ability to lead the Court.
According to one witness, Bradley charged toward Prosser, shaking her clenched fist in his face. Another source says they were “literally nose to nose.” Prosser then put his hands up to push her away. As one source pointed out, if a man wants to push a woman who is facing him, he wouldn’t push her in the chest (unless he wants to face an entirely different criminal charge). Consequently, Prosser put his hands on Bradley’s shoulders to push her away, and in doing so, made contact with her neck.
At that moment, another justice approached Bradley from behind and pulled her away from Prosser, saying, “Stop it, Ann, this isn’t like you.” Bradley then shouted, “I was choked!” Another justice present replied, “You were not choked.” In a statement following the incident, Bradley maintained Prosser “put his hands around my neck in anger in a chokehold.”
On Monday night, Bradley called Capitol Police Chief Charles Tubbs to talk to him about the incident. On the morning of Wednesday, June 15, Tubbs joined the justices in a closed-door meeting, where he discussed “issues relating to workplace violence.”
During the meeting, Chief Justice Abrahamson actually reenacted the incident on Chief Tubbs — no doubt an amusing sight, as the diminutive Abrahamson mimicked choking the tall, portly police chief. During her demonstration, Abrahamson emphasized that Prosser had exerted “pressure” on Bradley’s throat.
“There was no pressure,” interrupted the justice who had initially broken up the incident between Bradley and Prosser. “That’s only because you broke us apart,” shot back Bradley. This exchange led several meeting attendees to believe Bradley was making up the charge, as they took her rejoinder as an admission that there was no pressure applied to her neck.
During the Wednesday meeting, Bradley urged the justices present to take a vote on whether Prosser should be forced into anger-management counseling. The threat was implicit — if they didn’t vote her way, she would be forced to “take the next step” against Prosser, which they took to mean filing a restraining order against him. The other justices balked, wondering whether they even had the authority to order Prosser into any type of counseling. Some thought it would be “demeaning” to Prosser to have to go to counseling when he had done nothing wrong. In the end, Bradley realized she didn’t have enough justices on her side and no vote was taken.


Here's Sly in the Morning with John Nichols and their take on this article:

According to the jsonline;

Supreme Court Justice Ann Walsh Bradley asked Justice David Prosser to seek therapy to manage his anger two days after she says he put his hands around her neck, but he declined to do so, according to sources familiar with the situation.

The request came June 15, when all the justices met with Capitol Police Chief Charles Tubbs to discuss the June 13 altercation between Prosser and Bradley. At least some of Prosser's fellow conservatives on the court said it would be ridiculous for him to take such courses, the sources said.