Brookfield adds about 7,500 votes for David Prosser from Cty Clerks Personal Computer!!! Guess who made the mistake... 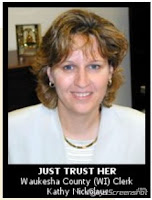 Did it seem odd the Prosser campaign waited so long to decide if they wanted a recall?


jsonline: In a political bomb blast, the clerk in a Republican stronghold is set to release new vote totals giving 7,500 votes in the state Supreme Court race back toward Justice David Prosser, swinging the race significantly in his favor.

The press conference is posted BELOW from Waukesha Co Clerk Kathy Nickolaus, who by the way was "granted immunity after the state's caucus scandal. She was then an Assembly Republican Caucus employee" according to Wisconsin State Journal reporter Mary Spacuzza. "Clerk Kathy Nickolaus subject of Ethics Board inquiry in 2002 after she bought lists of registered voters w state $. Kathy Nickolaus worked for Assembly Republican Caucus when Prosser was Speaker. Caucus is controlled by speaker, so he is her former boss."
This might be more explosive than anyone might have imagined…
From Brad Blog, August 16, 2010:

Waukesha - Waukesha County Clerk Kathy Nickolaus' decision to go it alone in how she collects and maintains election results has some county officials raising a red flag about the integrity of the system.

Nickolaus said she decided to take the election data collection and storage system off the county's computer network - and keep it on stand-alone personal computers accessible only in her office - for security reasons.

"What it gave me was good security of the elections from start to finish, without the ability of someone unauthorized to be involved," she said.

Nonetheless, Director of Administration Norman A. Cummings said because Nickolaus has kept them out of the loop, the county's information technology specialists have not been able to verify Nickolaus' claim that the system is secure from failure.

"How does anybody else in the county know, except for her verbal word, that there are backups, and that the software she has out there is performing as it should?" he said. "There's no way I can assure that the election system is going to be fine for the next presidential election."

The audit concluded that while the clerk's system generally complies with state and federal guidelines and accuracy of election totals was not at issue, Nickolaus should improve security and backup procedures.

Although it was not among the audit recommendations, Nickolaus' decision to no longer report municipal election results separately on election night, as many other county clerks do, has raised questions.

Nor does she show in the running totals throughout election night what proportion of the voting units are included in the tallies.

Something is terribly wrong.