What we’ve seen in just the first 100 days or so of the Walker administration is breath taking. Can you imagine what might take place in the upcoming 100 days? Imagine no more: 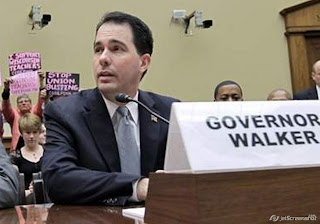 Forbes: Reports are surfacing that Scott Walker is now preparing his next assault on the democratic political process in the State of Wisconsin. Following the lead of Michigan GOP Governor Rick Snyder, Walker is said to be preparing a plan that would allow him to force local governments to submit to a financial stress test with an eye towards permitting the governor to take over municipalities that fail to meet with Walker’s approval. Such a law would additionally give Walker unchallenged power to end municipal services of which he disapproves, including safety net assistance to those in need.

According to my sources, the plan is being written by the legal offices of Foley & Lardner, the largest law firm in the state, and is scheduled to be introduced to the legislature in May of this year.

Despite the lack of press coverage, Michigan’s governor is already taking action:

Gov. Snyder’s extraordinary law became all too real this week when Emergency Financial Manager, Joseph Harris, appointed by the Governor to take charge of  Benton Harbor, Michigan, issued an order which took away all powers of the city’s elected officials. Yes, this has really happened right here in the United States of America.

One thing about the radical Republican movement, it’s well organized and on the same page;

Walker’s plans give further credence to the notion that the efforts of the GOP governors with Republican majorities in their state legislative bodies are part of a coordinated plan to enforce a right-wing agenda designed to not only destroy state, county and municipal employee unions, but to take control of local governments by replacing elected officials with appointees, both corporate and individual, of the state’s highest executive officer.

Look out Mayor Tom Barrett, you said some things during the campaign that angered Walker, your city is first. I wonder how many cities will be able to pass Walker's custom made "stress test?" Mayor Soglin has got to know Madison is the Republican Parties ultimate conquest.