The Gary Cooper movie "Fountainhead" had a screenplay written by Ayn Rand, which made the film a direct extension of her twisted vision of a dystopian anti-society. Many years later and a growing anti-government movement of low information tea partiers, parroting the corporate influenced dialog of our time, an updated Ayn Rand picture is emerging that deifies her place in history.


The first installment of "Atlas Shrugged," the movie, garnered an audience that pretty much reflected the actual size of the tea party movement. It was small and it failed. 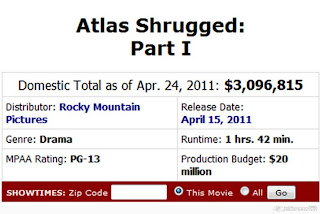 As Mario Piperni described in his blog:


Any bets we’ll never get to see a Part 2 or 3?  A trashy novel written by a delusional author turned into a film described by one critic as “an eye-rollingly clumsy amble through a Middle Earth of Monopolists” leads to a $3 million return on a $20 million investment.  Perfect.  I guess the base is too concerned about unseen birth certificates to find the time to view a movie based on a book which carries the tagline “Screw everyone but ME! All that counts is making money.”

NOTE for tea party "readers" seeing this post, her name is pronounced "eye-n."