Walker was against voter bribery, before he was silent about it. Can shots for recall signatures be illegal?

I’m not sure how election law applies to gathering recall signatures, but it does raise a few important questions about the legality of compensating anyone for a recall signature.
According to One Wisconsin Now: 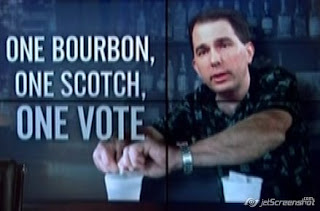 Gov. Scott Walker, who filed the complaint with the Milwaukee County District Attorney in 2000 over charges cigarettes were provided to a handful of potential voters, has remained uncharacteristically silent on evidence released this week that people were being promised liquor to sign recall signatures against a Democratic State Senator.

“In 2000, Scott Walker personally filed the complaint with the Milwaukee County district attorney calling for an investigation into what he called bribery, but ‘shots for signatures’ appears to be fine with him now,” said Scot Ross, One Wisconsin Now Executive Director.

“When will Gov. Walker file a complaint with the District Attorney?”

Here are a few past statements from Scott Walker:


“Let me qualify that since we brought the original episode of the cigarettes-for-votes issues to the attention of the district attorney's office on Monday, they have been aggressive in seeking to follow up on that…” [Walker Press Conference, 11/10/00]

The trading off of anything, something of worth, in exchange for someone's vote -- not only is it ethically questionable, we believe it's a violation of the law.” [Walker, WISN-TV 11/5/00]