Concealed carry bill should include access to Capitol building, for safety's sake!!! 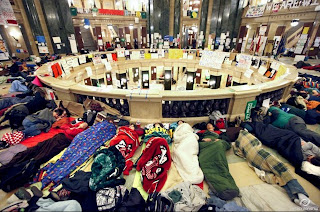 What an amazing contradiction; the Capitol is still in lock down, despite a court order to return it to normal, because frightened state Republican lawmakers are worried about their safety:

WSJ:…at least one fixture of the winter protests remains: heightened security. Metal detectors and law enforcement still flank the hallways of the Capitol's only two open entrances. Six other ground level entrances have been closed for weeks, and protests are now limited to the rotunda's ground floor, although demonstrators can move about the building when not protesting ... Although the protests have largely stopped … a spokesman for the state DOA would give no indication this week when the added security might be eased.

How unsafe are the conditions in and around the Capitol for these Republican victims of their own extremism?:


Dianne Wiegel (a protester) said she had to wait in line for 20 minutes as police checked a group of children through security Thursday. Wiegel said. "One cop I talked to before said as long as Walker feels threatened in here, they're going to keep it that way."

Wouldn’t Walker feel much safer, just like the public would enjoying a family outing in our local restaurants and bars, knowing paranoid hobbyists will be walking around with load assault weapons?

According to Madison officials, legislators in the Assembly and Senate are now drafting a (concealed carry) bill ... anticipates a bill be will be drafted in the next couple weeks, and … Sen. Pam Galloway, R-Wausau, is working on it.

Let’s hope we can safely open up every level of the Capitol again to pro-labor rallies, knowing concealed carry hobbyists will have our back if something goes terribly wrong, like illegally posting a sign over the balcony.
Posted by John Peterson, Democurmudgeon at 4/28/2011 10:43:00 AM