At a Closed Democratic Event, Sauk County Republican Party Chair Tim McCumber is unapologetic about the coincidental disturbance; Liberals caused it! To quote Maxwell Smart: “Would you believe…?”

The latest Republican tactic to disrupt listening sessions and private Democratic events plays on the parties biggest strength of all, lie like hell. Their alternative universe is littered with lies like death panels, Obama’s a Muslim, government takeover of health care (lie of the year), saving Medicare and Social Security, small government, Sharia law…you get the idea.
So Republican Chair Tim McCumber must be telling the truth…this time? 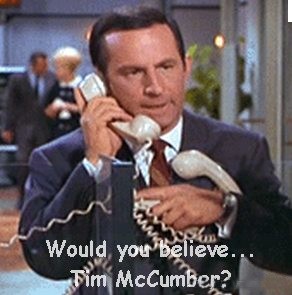 "This gang is very good at instigating events and then pointing fingers the other way,"

But in the reality based world, the closed private event saw something different:

McCumber and other conservatives entered the room - some of them forcefully. They held signs and shouted statements at Clark as he addressed his supporters.

He didn't hear any of that. "I didn't hear what they said," McCumber said. "I was in the back of the room."

“Would you believe…?” But what were the Sauk County Republicans doing there in the first place, since it was a private event?

One more note:  McCumber "alleged that an incident in which an Olsen supporter broke the lens of a Clark supporter was instigated by the Clark supporter, because he was getting too close with his camera."

Too close with his camera? Is he kidding?