No one wants to say it, but Rep. Paul Ryan's "Path to Prosperity" is bringing out larger, angrier crowds than Obama's Affordable Care Act. Funny it's never mentioned.

It also takes a brave conservative to appear at a public "listening session" in front of a large crowd of angry citizens. Sure they were looking to victimize another Republican with a public tongue lashing, but what about the issues? No wonder conservatives feel so picked on.

Rep. Paul Ryan's disappointing appearance in Kenosha created a public relations problem for Ryan. He had to explain why so many people were unhappy. Suddenly, Ryan ran from the scene in fear for his safety, conveniently leaving that question unanswered. WTMJ4:


TMJ4 set up an interview with Ryan following the meeting, but it was scrapped by staffers and police over a security concern. The congressman changed the door where he planned to exit and left in a different vehicle than the one than he arrived in. “There were just definitely some loud hecklers who came that gave the police a little concern,” Ryan told TODAY’S TMJ4 reporter by phone. Ryan insists the hurried exit should not be “blown out of proportion.”

The threatening crowd of seniors were too much for Ryan:

Protesters waited for Congressman Paul Ryan outside a listening session, many of them were seniors, holding preprinted signs that read ‘Hands Off My Medicare." 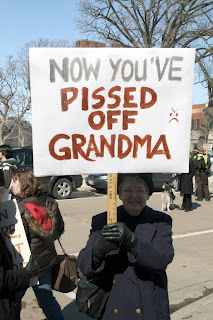