What Many Conservatives still don't know about Paul Ryan's Past, and Social Security. 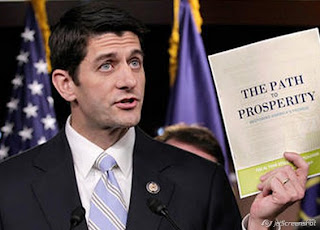 I've mentioned how Paul Ryan used Social Security to pay his way through college a number of times here, but I thought this retelling was just to good to pass up. Politicususa:

When Representative Paul Ryan was 16 years old , tragedy struck his family. His 55 year old father had passed away from a heart attack. Young Paul Ryan found his father’s lifeless body and was burdened by the fact that he had to tell his mother and siblings of this horrible situation.

After his father’s passing, young Paul Ryan started collecting social security benefits until the age of 18 years old. He took this benefit and saved it for his college education. Representative Paul Ryan is one example of the millions of people whose lives have depended on our social contract with the American people. Without this benefit, his mother would have had to make even tougher decisions and Representative Paul Ryan may not have been able to pay for his college education. This social contract lifted him and his entire family out of a tough situation.

Many people do not know that 30% of the social security fund goes directly to widows, orphans and the disabled. It is not solely for the benefit of retirees. Unfortunately this social contract is under a regressive attack by the Republicans, including Paul Ryan. The attempt of these regressives is not that they want to reform the system, they do not believe the government should be involved in social programs at all. It is purely ideological, even though it was progressives that lifted them out of dire straits.

Leave it to the conservative rag, the Washington Examiner, to twist this hypocritical Ryan story into something even more wretched.


The net effect of the death of Paul Ryan’s father was likely to reduce taxpayer expenditures on Ryan’s family, since retirees typically collect at least a decade’s worth of benefits.

Got that, us taxpayers saved money because of Ryan’s fathers death. What a bunch of Republican ghouls.
Posted by John Peterson, Democurmudgeon at 4/19/2011 11:57:00 PM