The poor picked on conservatives have lost another reason to complain today, after it was revealed they were played for fools by Sen. Dan Kapanke, over "liberal vandalism" to Kapanke's car.
There is no question Kapanke lied to gain sympathy and to promote an atmosphere of fear. 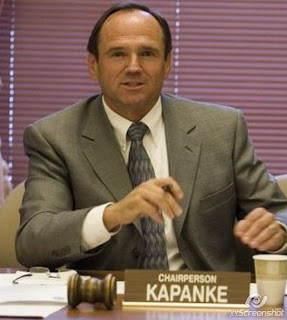 It came to light a week later when state Sen. Dan Kapanke (R-La Crosse) and an aide told several news outlets, including the Journal Sentinel, he was scaling back public appearances in his district out of concerns for his safety. In doing so, they cited vandalism to his car while it was parked at the Capitol.

This is where Kapanke's wheels came off. This isn't based on my own opinion, or anyone else's. That vandalism was determined to be the result of a stone chip while driving by professionals.

According to the report, an officer and two state troopers, including an accident reconstruction specialist, looked over the windshield that day.  The Capital Times first reported April 5, 2011 on the police report. "I informed Kapanke after looking at the chip and the crack it looked to me like a stone chip and not someone hitting the windshield," Capitol police officer Chris Weiss wrote in the report.

The troopers came to the same conclusion. The report also said police reviewed surveillance video of the parking area and saw no one damaging cars.

But from this point on, Kapanke shaped the story of protester vandalism, and a reason to lay low after his controversial vote.


The report says Kapanke, one of the GOP senators facing a potential recall, was informed of the findings and the case closed on the day it was reported -- March 16. But the public heard about the damage for the first time the following day, when the senator cited the damage while discussing plans to scale back his public schedule out of concerns for his safety.

La Crosse Tribune reporter Chris Hubbuch inquired ... on March 16, 2011 … aide Rose Smyrski called him back and listed the broken windshield as among the matters that was causing concerns for the senator’s safety. "She said his window was broken," Hubbuch said.

If that were't bad enough, Kapanke's campaign of fear and victimhood went for all the apples:


Kapanke told a La Crosse TV station in a story that aired March 17 that he was concerned for his safety. He reminded viewers of the Jan. 8, 2011 shooting of Arizona Congresswoman Gabrielle Giffords.

Kapanke allowed the myth of the smashed windshield to run wild and uncorrected for almost three weeks after he knew it was not true.