While Paul Ryan offers massive tax cuts to wealthy, he tells voters they'll pay more...So which is it? 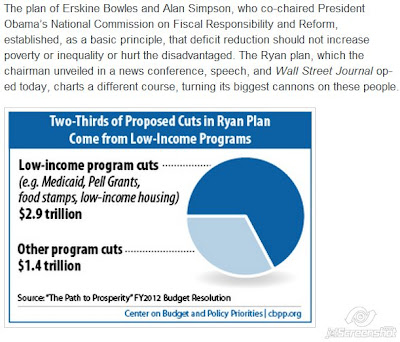 Below is an Ed Schultz interview of Town of Waukesha resident June Kilgren, who's comments are part of the jsonline story covering the crowd reaction to Rep. Paul Ryan's first town hall meeting. Here's how that report described the action:

North Prairie — A village hall packed with about 170 people offered a large measure of support … About a dozen people in the Waukesha County audience got to ask questions … Two of them said Ryan's plan for spending cuts fell short because it didn't raise taxes on the very richest of Americans or relied on spending cuts when it also needed higher taxes to boost revenue. A couple, sounding skeptical, questioned him about on details of his proposal to overhaul Medicare for those now 54 or younger.

Bob McCann of Eagle asked Ryan if he was serious about the deficit reduction. When Ryan answered "yes," McCann challenged his reliance on dramatic spending cuts and further dropping tax rates even though historic tax rates have been much higher since World War II. McCann said both higher taxes and spending controls were needed.

Ryan answered, "If you try to tax our way out of the problem, you'll just shut down the economy," particularly where international tax competition between global economies is occurring.

June Kilgren of the Town of Waukesha said her own experience with insurance companies makes her concerned about how the next generation will deal with it under Ryan's Medicare plan. She worries about denial of coverage and costs.

Ryan said wealthier people will pay more for their insurance, poor people will get theirs totally subsidized, sicker individuals would get greater subsidies, and "you can't be denied coverage."

Kilgren wasn't convinced, saying, "I don't quite trust it, no matter what you say."

Schultz dug a little deeper, and got this response by a thoughtful, informed Kilgren: