When is ‘I Dream of Jeannie,’ ‘Get Smart’ and ‘Lost in Space’ similar to a lifesaving program like Medicaid? When Scott Walker makes that inhumane, pathetic comparison.

I’m not even sure I know how to even begin to discuss this brutal back hand to Medicaid by Scott Walker. But here goes…: 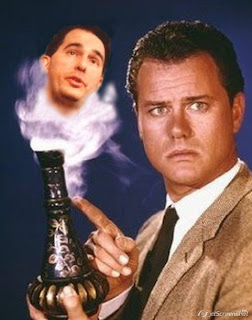 "What does Medicaid have in common with 'I Dream of Jeannie,' 'Lost in Space' and 'Get Smart'? They all made their debut in 1965," Walker writes. "Although we enjoy watching reruns of these classics, the television networks have updated their programming. The federal government should do the same.'

Walker show off his lack of knowledge about health care reform, by not recognizing that in the following list he provides in his editorial, all were developments spurred on by Obama’s plan:

NY Times: Time and again states like Wisconsin have blazed the path in Medicaid … Just now Washington is discovering accountable care organizations (networks of doctors and hospitals that share responsibility for caring for patients and receive incentives to keep costs down) and “medical homes” (a model in which one primary-care doctor takes the main responsibility for a patient).

Finally, instead of recognizing how many employers are now dropping health care coverage, and how many people don’t make enough at their job or don’t have jobs at all to pay for insurance, he thinks Medicaid is growing because states love sucking in more federal dollars for the heck of it.

Amazingly, the program is now viewed by some states as a form of economic development because each state can at least double its money for each dollar spent. That matching feature penalizes efficiency and thrift, since a reduction of $1 in state spending also means forfeiting at least one federal dollar, often more. Finally, some state officials oppose block grants because capped financing would bring the fiscal discipline they try desperately to avoid. But this discipline is precisely what is necessary to slow the rate of growth in health care costs.

That’s right, not covering as many people is one way to slow the growth of health care costs. I really liked this recent comment:


The Flying Nun, Mannix and The High Chaparral all made their debut with Scott Walker back in 1967. The television networks were smart enough to update their programming since then. Wisconsin should do the same.