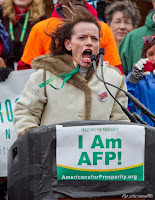 WIBA 1310 must be so proud. "Shut up" shouted their conservative afternoon on-air whiner. Nothing says smart like telling your opposition to shut up.

Like the Koch brother billionaire's pissing on our Capitol, their Americans for Prosperity signs were tacked up everywhere, while Vicki McKenna was in her best smokers voice, claiming ownership of the city, state, and Capitol. This was not a time to share the moment with fellow Wisconsinites. No, that would be antithetical to the tea party movement. Instead, it was a time to declare the state theirs for the taking.

The most telling moment of all; McKenna thanking one of two most wealthy, elitist counties in the state for being the conscience of Wisconsin. Nice choice, Vicki. Pretty much the "tree stand" type, huh?

We're the Koch brothers so insecure, or bombastic, that they unintentionally embarrassed themselves by making people hold a long banner with their groups name on it throughout the event? Wasn't the podium sign ironic enough for these defenders of "average people."
Posted by John Peterson, Democurmudgeon at 4/18/2011 12:54:00 PM