Gas is expensive because of speculation!!! Is anyone listening?

Again, we have an over supply of oil right now, but rising gas prices. What does that mean? We've got a Wall Street speculation problem, plain and simple. Even OPEC is bugged by everyone cutting back on usage, driving supply up, while speculators are taking much of their thunder away. 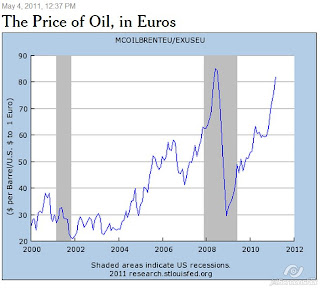 The maddening cry by Republicans to drill more, which would just add more oil to the WORLD MARKET and not to U.S. supplies, is frustrating and wrong. Not only that, the GOP is holding up the Dodd-Frank Act that regulates these same speculators. Which means, Republicans are making the gas price crisis worse by preventing their regulation.

Tyson Slocum from Public Citizens Energy Program lays it on the line in the clip below. A must see.


This is what really rankled me:

The Hill: An aide to House Speaker John Boehner (R-Ohio) warned Friday that Democrats are using the federal probe of potential energy market abuses to sap focus from expanding domestic energy production. “We all want to ensure that such manipulation or fraud is not going on, but the concern is that the Democrats who run Washington are using this to distract from the real issue: the need to increase the supply of American energy to lower costs, reduce our dependence on foreign oil, and create American jobs,” Michael Steel, Boehner’s spokesman, said in a statement.

It won’t make a difference. NONE!!

A Democratic member of the Commodity Futures Trading Commission, one of the agencies that will participate … Bart Chilton … in applauding the effort, also made clear what he thinks a major focus should be. “I remain convinced that excessive speculation is a part of the problem and should be part of the group’s focus, too.