In conjunction with my earlier post today from the MacIver Institute, Walker and his band of pirates are making things worse with right wing theories that research says just doesn't work.

Wrong Way Walker has loaded up his State of the State speech with every bad move listed below: 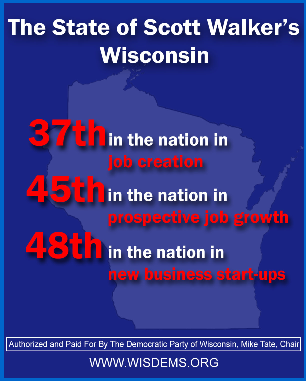 If corporate taxes were as important for location decisions … it is hard to see why California, with a state corporate tax rate of nearly 10 percent, is home to more than one out of nine establishments in the United States.

We have developed a study to answer these questions and determine who benefits from cutting corporate taxes. This research analyzes every change in state corporate taxes since 1980 and measures the responsiveness of businesses to tax changes. We find that, across the country, most firms choose to pay higher taxes and locate where their productivity is highest, rather than chase tax incentives.

We also measure what happens to wages and firms’ profits after states cut corporate taxes, and find that firm shareholders benefit more than workers from state corporate tax cuts. Moreover, workers are left with the bill to pay these generous incentives to firms in the form of lower corporate taxes.

Policymakers do not necessarily need to lower taxes to attract companies; they can do so through other means such as enhancing productivity.

There is good evidence that it would be in the nation’s interest to improve infrastructure and workforce skills. Building a foundation for future productivity growth through infrastructure investments, especially when it is cheap to do so, is quite attractive. It would be a smarter way to compete for businesses – and to help long-suffering workers.