When a state has a huge, massive tax revenue surplus, could it mean that many of the past austerity measures were completely unnecessary and just more image building by the Republican Party?

Yes. In fact, we still don't have enough money in the transportation fund, a job creator if there ever was one. The tweet to the right said it all. 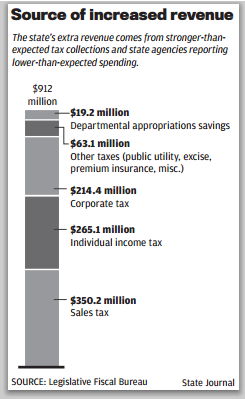 Yet the chart provided here by the Wisconsin State Journal tells me Walker's failure to create jobs and attract new businesses means he's trying to bolster his reelection image on the nations general economic recovery, a policy his party opposes.

Despite the numbers that say the opposite, Walker might just get away with this whopper:


WSJ: Gov. Scott Walker said in a statement that the additional revenue “is a sign Wisconsin’s economy continues to grow and add jobs, and it’s more great news for the hardworking taxpayers.”

Lessons Not Learned: Tax cuts, rebates, election year slogans like "give the money back to taxpayers" has proven to be bad economics in the past, and true to GOP ideology, will be in our future. We didn't learn our lesson with Gov. Tommy Thompson's refund, or George W. Bush's big tax cut, which he said would not wipe out projected budget surpluses "as far as the eye could see?" Walker would rather keep his job than create jobs or manage the economy:


(Walker said,) “The additional revenue should be returned to taxpayers because it’s their money, and my administration will work with the Legislature to determine the most prudent course of action.”

Why can't state's strengthen their economic futures when times are good?  And what happens when the state needs that revenue during another economic downturn? Are voters this dumb? Yes. I can't believe I'm writing this, but Republican Sen. Scott Fitzgerald had a good idea:


Senate Majority Leader Scott Fitzgerald, R-Juneau, said his caucus would like to erase the 2015-17 structural deficit — which previously was estimated at $725 million. There is also support for additional tax cuts this year, rather than holding onto the money as part of larger tax reform in the next biennial budget.

Not in an election year folks. From WKOW:

Walker is also still feeding off Democratic Governor Doyle's policies. The details HERE at Rock Netroots.
Posted by John Peterson, Democurmudgeon at 1/17/2014 09:14:00 AM