Enemies of Solar, be afraid, be very afraid of the...Betaray!!!

I just thought this solar "ball" was the greatest thing, from Smithsonian Magazine:

..The maximum theoretical conversion efficiency of conventional silicon-based photovoltaic cells is about 33.7 percent, meaning that 33.7 percent of all sunlight hitting a cell can be converted into electricity. Put simply, the most optimal way of producing solar power is still too cost prohibitive to compete. 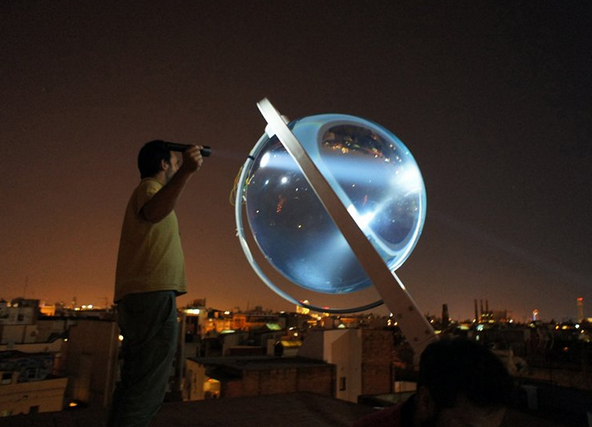 German architect André Broessel, who's thought long and hard about these insufficiencies, claims that he’s invented a model device that’s designed to get around these bottlenecks. Fundamentally, his Betaray concept isn't a radical departure from other panel technologies out there since it also uses solar cells to collect sunlight. The energy, however, arrives in the form of an energy-dense beam that's concentrated up to 10,000 times. Above the miniature array of solar cells is a large water-filled glass orb that works similarly to a magnifying glass in focusing the light that’s present during all sorts of less-than-ideal conditions, like when skies are cloudy or when the only available light is the low-intensity illumination reflected by the moon.

Broessel estimates that the clear "ball lens" helps improve efficiency by up to 50 percent annually—all while using a cell arrangement that comprises less than 25 percent of the silicon cell area found in most systems. "Most of the expensive aspects of solar systems come from the production of cells, which also leads to a high carbon footprint," Broessel says. "And when there's lousy weather, the production is equivalent to peanuts, even when they're in perfect position.”


The Betaray utilizes what Broessel calls a dual-axis tracking feature to monitor the continually changing position of the sun and adjust accordingly to maximize input.

Juris Kalejs, chief technology officer at solar systems developer American Capital Energy, acknowledges ... "It's a very tricky system to make," he told Discovery News, "and you need to make it on a large scale to make it cost effective."

Broessel, however, disagrees and counters that Betaray can be cost effective when taking into account the totality of not only production costs, but also projected savings on the owner's energy bills in the long term. He points out, for instance, that constructing the device involves “very basic materials,” like water and glass, that cost less than manufacturing photovoltaic cells.

"You can optimize the conversion of light into energy all year round, even in bad weather," he says. “It's not unrealistic to think that in a year, it can double your energy yield.”

Labels: Solar
Email ThisBlogThis!Share to TwitterShare to FacebookShare to Pinterest