Jobless who have given up the search, now at 1977 rate.

Walker is running for a second term on the statewide unemployment rate of 6.3%. But that measures only those looking for work. What about those who've given up and dropped out, or have become so frustrated they've simply retired early? And I'm not even including the underemployed either.

Republicans always blame Democrats, including President Obama, for not reporting the higher unemployment that includes the estimated non-participation numbers. Yet they never bring it up for people like Scott Walker.

It's gotten so bad that even GOP presidential hopeful "Bridge" Christie, whose high unemployment numbers (49th in the country), aren't hurting his chances or destroying his credibility as a politician.

So what gives? Explained below, we found out things are not good. Wonkblog: 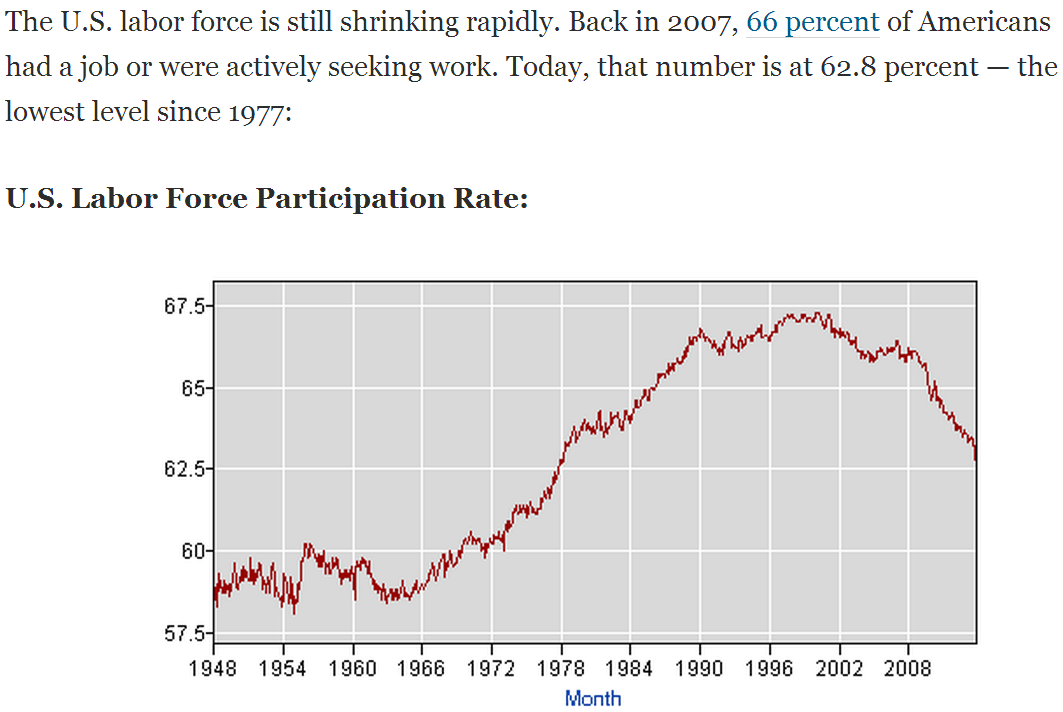 So, why does the size of the labor force matter? If people are leaving the labor force for economic reasons (and they're not going back to school), it would mean that the economy is in much worse shape than the official unemployment rate suggests. The jobless rate is officially 6.7 percent, but that only counts people who are actively seeking work — not labor-force dropouts.

Even worse, if discouraged workers are dropping out of the labor force entirely (or retiring for economic reasons), they may never make their way back into jobs. Companies won't even bother to look at their applications. They essentially become unemployable.

Here's Jared Bernstein with the details on MSNBC:


That's a human tragedy. It could also mean the U.S. economy will be significantly weaker in future. One recent paper from the Federal Reserve estimated that America's economic potential is now 7 percent lower than it was before the financial crisis — in part because workers who lost their jobs during the downturn have become less-attached to the labor force. That's a bad sign.