Here's what Scott Walker's irresponsible knee jerk budgeting looks like, according to the Wisconsin Budget Project: 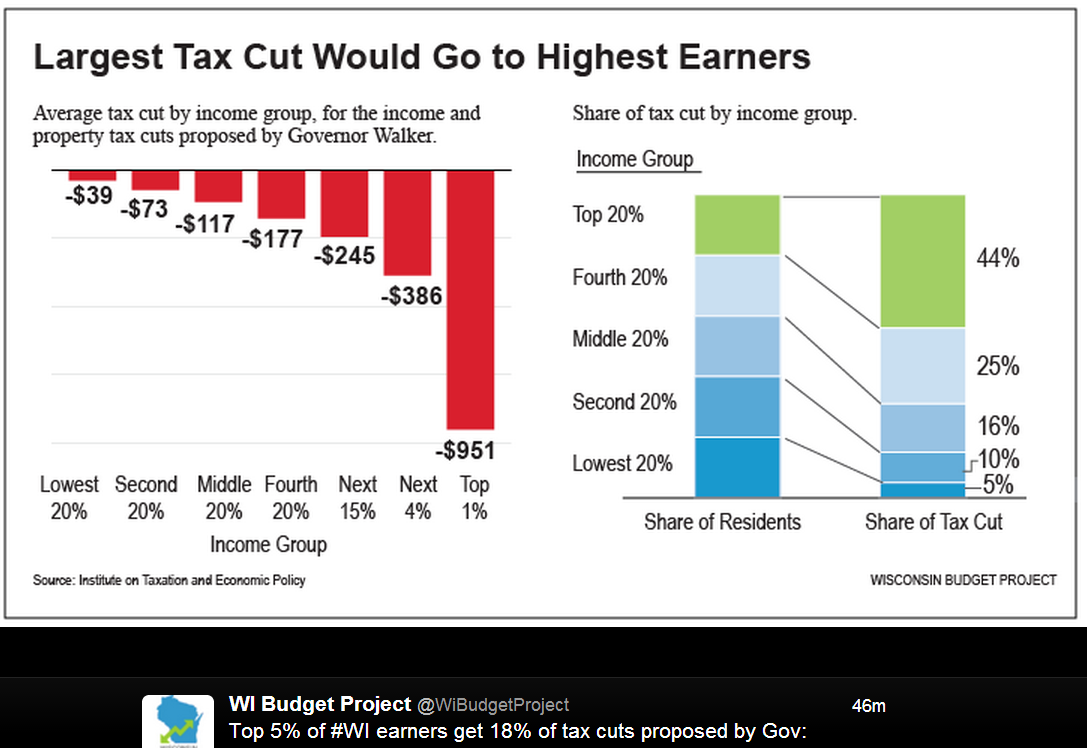 A fairer tax cut would be on just the first tax bracket, since that would effect all incomes while helping the poor and middle class. But that's not Walker's or the Republican goal. It seems responsible household taking the Milwaukee Journal Sentinel poll online are catching on.

Jon Peacock, the director of the budget project, opposes the tax cuts … said Walker could have restored the earned income tax credit that Walker and his fellow Republicans in the Legislature cut in 2011 by $56.2 million over two years. Walker also ended annual inflationary increases for the homestead tax credit, which is a property tax break that shows up as a credit on income tax returns for low-income homeowners and renters. "People shouldn't be misled to think there's much in it for the bottom two-fifths of Wisconsin," Peacock said of Walker's latest plan.

Andrew Reschovsky, who researches tax policy at the University of Wisconsin-Madison, said the proposed property tax cut would be of some help overall to renters, but it would also help state companies with Wisconsin parcels and well-to-do families with vacation homes, not just elderly homeowners struggling to pay their annual tax bills. "(Walker's) solution does not offer a lot of relief to those who really need it," he said.

Democratic lawmakers were more blunt. "It's more of the same," said Rep. Cory Mason (D-Racine), who sits on the budget-writing Joint Finance Committee. "It's, 'Let's give more money to the wealthy and hope it trickles down.' The problem is it doesn't work." He said the tax cuts were funded with past cuts to public schools, technical colleges and the University of Wisconsin System.