Walker Flips Position, Injects himself into legal System to Fire Teacher. This after rejecting a Veterans pardon. But Walker loves teachers?

Firing teachers at will is something Republicans have been working on for a long time. Now they have their first execution to prove their "moral" purity.

"If this were a dictatorship, it'd be a heck of a lot easier, just so long as I'm the dictator."-Bush

No Pardons-the Law is the Law: Scott Walker believes in the legal system so much that he even turned down an Iraq war veteran's request for a pardon (the guy wanted to become a police officer): 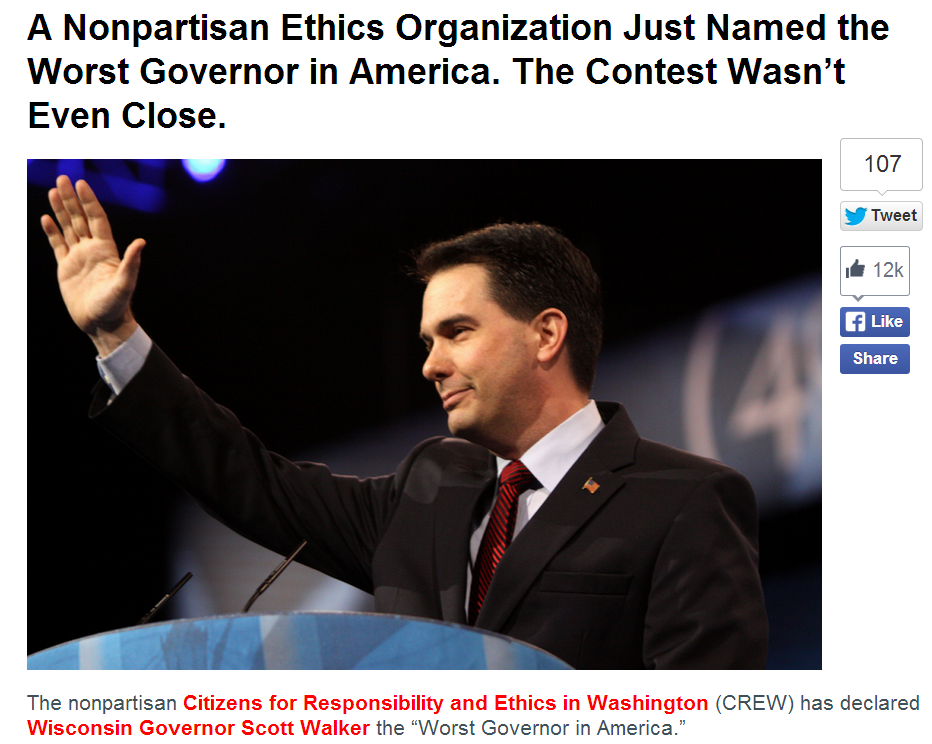 Walker has said he doesn't consider pardon requests because he doesn't believe he should inject himself into the criminal justice system. "To me, the only people who are seeking pardons are people who have been guilty of a crime and I have a hard time undermining the actions of a jury and of a court."

Flip Flop: "Undermining the actions" of the court(s): Even a decision by the state's highest court of law didn't slow Walker down in what he saw as an election year story of "moral" values. After a court ordered a fired teacher to be reinstated and the state Supreme Court agreed, Scott Walker's respect for the law and courts disappeared. After all, didn't Walker just defeat and vilify teachers?

Gov. Scott Walker has asked State Superintendent Tony Evers to begin license revocation proceedings for a Middleton teacher reinstated to his job this month after being fired in 2010 for looking at pornographic images at school. “After hearing from concerned parents..."

Here's Channel3000 with their coverage:

Actually only one parent.

Walker spokesman Tom Evenson said the governor sent the letter to Evers after hearing from one of those parents. In an email last week, an aide to the governor told parent Kira Dott that the matter was under the jurisdiction of the local school board and “further from the Governor’s jurisdiction as this was decided in the courts.”

Flip Flop: Just like that, Scott Walker is setting out to undermine the local school board and courts, in a big way. Here's a short history, a legal process Walker is about to reverse:

Other teachers also found to be violating the district’s policies on Internet and technology were not fired. An arbitrator ruled in 2012 that the district “has just cause to discipline Harris but because the penalty of discharge is excessive, arbitrary and an abuse of discretion, the penalty needs to be reduced to be comparable to other penalties for similar offenses,” and that he should be given a 15-day suspension instead.

Circuit and appellate courts upheld that ruling. Earlier this month, the Wisconsin Supreme Court declined to hear the school board’s appeal of the arbitrator’s ruling, prompting the district to comply with the ruling and reinstate Harris.

But a little known law passed in the shadow of Act 10 has suddenly put Walker in control:


A law known as Act 84 that was passed in 2011 further clarified immoral conduct to include looking at pornography on school computers. In the letter, Walker said “it appears (Harris’) behavior meets the definition of ‘Immoral conduct’” … giving Evers the ability to revoke Harris’ license … reforms Walker worked to put in place that gave “local school districts the tools they need to hire and fire teachers based on … professional conduct.

"If this were a dictatorship, it'd be a heck of a lot easier, just so long as I'm the dictator:"