Will tea party hardliners be okay with their tax dollars going to the poor? No. But that's the idea presented by Marco Rubio.

What would be easier, raising the minimum wage or devising a system that sends, every month, a taxpayer supported check to millions of low wage workers? A no brainer...you would think:

…I am developing legislation to replace the earned income tax credit with a federal wage enhancement for qualifying low-wage jobs. This would allow an unemployed individual to take a job that pays, say, $18,000 a year – which on its own is not enough to make ends meet – but then receive a federal enhancement to make the job a more enticing alternative to collecting unemployment insurance.  And it’s a better way of supporting low-income workers than simply raising the minimum wage.

"...simply raising the minimum wage" is the dead giveaway, and the real answer to poverty. Republicans are lousy at math and economics, they proved that with the Great Recession.

GOP War on Poverty? Are you Kidding? If what Marco Rubio also offered the other day is the official new Republican offensive of the war on poverty, we're not just in big trouble, but really dumb. During a recession, states would be on their own, no help...nothing. Food stamps and unemployment as seen on the chart below adjust. But the block granted program Temporary Assistance, stays the same, no matter how bad it gets.

According to Jared Bernstein:

Sen. Rubio gave a much touted speech on poverty policy wherein he proposed to turn the federal safety net programs over to the states in the form of “revenue neutral” block grants.  This is not a new idea folks.  It’s rehashed Ryan, if not Reagan.  What it really means is the safety net will be unable to expand in recessions … states will be unable to tap the Feds for unemployment benefits, nutritional assistance, and all the other functions that must expand to meet need when the market fails.  This would essentially enshrine poverty-inducing austerity, in place of literally decades of policy advancements to meet demand contractions with temporary spending expansions.

In the figure below, note the flat-line response by TANF (Temporary Assistance for Needy Families) in the great recession–it was block-granted in the 1990s–compared to SNAP or Unemployment Insurance (UI).  That gives you the flavor of what happens when you follow where Sen. Rubio is trying to lead here. 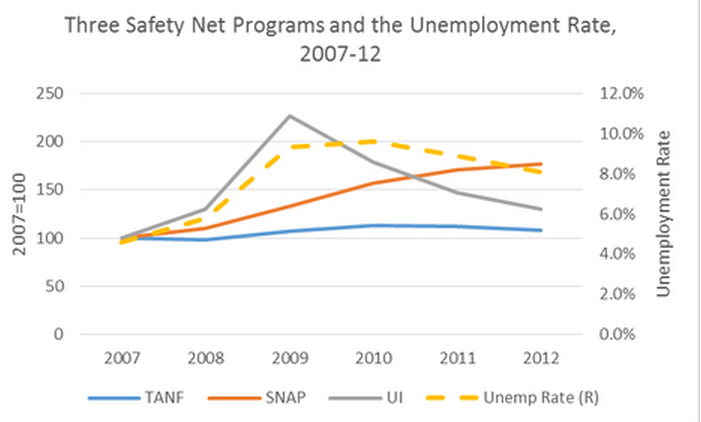