Investigations usually look into suspicious activity and decide to prosecute after examining all the facts. Turning that idea upside down, a judge not only decided lobbyist ads didn't support Walker, they also didn't come up with similar messages. Never mind the groups have similar donors. 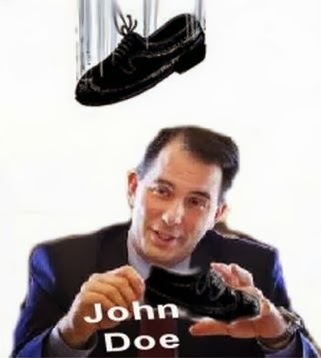 jsonline: Prosecutors in the John Doe investigation into spending and fundraising during the raucous Wisconsin recall elections were dealt a major procedural blow Friday … The five-county investigation remains open, but subpoenas issued in the probe to conservative political groups supporting Gov. Scott Walker were quashed … The ruling raises First Amendment concerns about the subpoenas.

These corporate lobbyists actually sold the judge on the idea that they are now afraid to spend money (supporting Scott Walker?) due to the investigation. Of course, they've got nothing to hide, so it’s logical to be afraid?

The investigation — first disclosed by the Journal Sentinel — is looking at whether such conservative groups as the Wisconsin Club for Growth coordinated illegally with GOP candidates or others during the 2011 and 2012 recall races.

This kind of coordinated activity is so common now, what might have been suspicious once is now considered normal operating procedure, especially by the real masters of politics.

While Republicans hold Moveon.org and George Soros guilty of controlling the Democrats Party, the names on the following rogues list have no skin in the game or interest in Wisconsin politics, or so says Scott Walker right?

Retired Appeals Judge Gregory A. Peterson, who took over the case in November … said the "quashed subpoenas were sent to Friends of Scott Walker, Wisconsin Manufacturers & Commerce Inc., the Wisconsin Club for Growth, and Citizens for a Strong America, as well as their officers and directors."

These "innocent lobbyists," who just happen to be in our state at the time, spent money here on a media shopping spree because…it was an impulse buy? They couldn't help themselves?


Peterson rejected the prosecution's theory of illegal coordination between the groups and Walker's campaign. Prosecutors did not show that the groups expressly advocated for Walker's election, the story quotes Peterson as ruling.

Playing off the surreal reasons the judge came up with in his decision, one power broker took this victory lap:


R.J. Johnson, posted this on his Facebook page: "To those who know the hell we have gone through over the last three months — we have been completely and utterly vindicated. Thank you Lord!"

The Lord backs big money and Scott Walker of course.