Dumb Ron Johnson has always had to construct a "false premises" around every program he didn't like, in order to sell his arguments to the public. To justify attacking the poor in our new post-Great Recession economy, Johnson had to portray them as crooks, the "takers" we hear so much about from the likes of Paul Ryan.

Lie: Johnson likes to manipulate that unique conservative thought process that assumes the undeserving poor are getting something for nothing. And reverse class envy, where the well off are jealous of the scraps doled out to the poor, is the easiest hot button issue to exploit. Johnson's panicky guy routine is the perfect delivery system too. Here's Politifact with another correction: 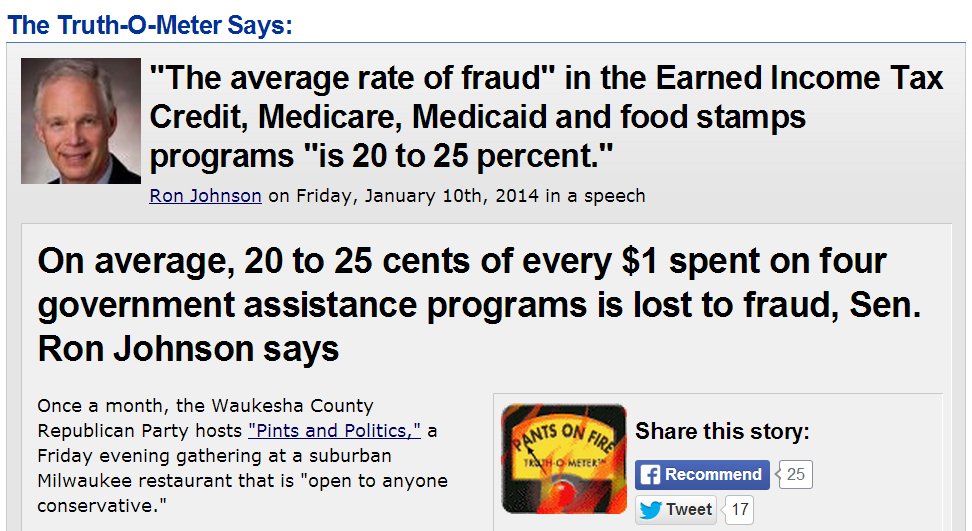 Johnson said: "The average rate of fraud" in the Earned Income Tax Credit, Medicare, Medicaid and food stamps programs "is 20 to 25 percent."

Improper payment rates are in the 20 to 25 percent range in the tax credit program -- but are 10 percent or less in the other three programs. So, even the average among the four programs would be far less than what Johnson claimed.

More importantly, those are error rates; there are no figures on the rate of fraud, which is believed to be a small component of errors. Johnson’s remark to the group was grossly misleading.
For a claim that is false and ridiculous, we give Johnson a Pants on Fire.