We Take Our All-You-Can-Eat Fish Fry's Seriously in Wisconsin!

I grew up on a diet of all-you-can-eat "everything" menus, but the fish fry's here were always the most popular. I feel sorry for the restaurant on the receiving end of the following incident, but what the heck, in this conservative little part of Wisconsin, gluttony is just another badge of honor. 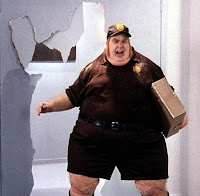 MequonNow: A 53-year-old Mequon man was arrested for disorderly conduct after being told the Thiensville restaurant at which he was dining ran out of fish for its all-you-can-eat fish fry last week.

The man returned to the restaurant in the 400 block of North Main Street on  Sunday with a picket sign protesting what he said were the restaurant's poor business practices.

Oh boy, there's video on this, and the story is just a little bit different. The guy was ejected by the cops for not paying, was a regular at the restaurant and was allowed to run a tab...a pretty ungrateful customer. He even shared the all-YOU-can-eat with his friend. WISN 12 :