It always felt a little odd when Scott Walker would bring up his status as an Eagle Scout. I personally have never felt a need to mention my days as a member of the Young Men’s Christian Association (YMCA), or the two medals I won during the Olympic Day events for the javelin and basketball throw. Come to think of it, maybe I should.

So I thought I’d pass along this excerpt from the blog, VoicesNewspaper, that explains why it is so wrong to use such an honorable childhood tradition to hide ones sociopathic behavior. The Scouts should waste no time removing his rank. 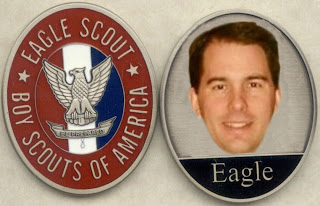 Scott Walker proclaims, "Who, me a Lying Liar?  I'm a SCOUT!"  a statement that should set bull-excretion meters blazing. From VOICES "You Can't Make This Crap Up" department, there are actually media hacks professionals that spew the lie that no Eagle Scout has ever been convicted of a felon or serious crime!  There have been very prominent Eagle Scouts that have committed atrocious crimes and the media fully knows this - Arthur Gary Bishop, a serial killer; Mark William Hoffman, a forger and murderer: and Charles Whitman, the Texas tower sniper, are three national news stories that come to mind. This is propaganda, misinformation that is disseminated via mass media for a purpose - in this case, allowing folks like Wisconsin's Deceiver-in-Chief, Scott Walker, to hide behind a Boys Scout badge.  His claims are fully-irrational, but highly emotional to those that hold the values that the Boy Scouts beyond approach.  This is how propaganda works - its all based on emotions, though some skewed rational is often present so that people can justify their emotional responses.

In the earlier days of the Boy Scouts of America (before 1970), a Scout who commited a crime or had "tarnished the good name of the Boy Scouts" could have his rank removed and returned to the BSA by the Scouts' Scoutmaster. And in case you are wondering, Eagle Scouts can be shown to participate in criminal behavior (links HERE, HERE, HERE, HERE, and HERE - scan down column, several "occupations" are listed as CRIMINAL!). I could go on and on.  If you Google EAGLE SCOUTS CONVICTED you will see 329,000 hits (as of 5/26/2012) documentation that hundreds or even thousands of Eagle Scouts have committed and been convicted of serious crimes.

So what does Scott Walker do when he gets caught in a lie?

He changes the subject - he is an Eagle Scout! Of course, maybe there is a secret Eagle Scout program for young fascists that are being groomed to become petty little dictators.  And HERE's a link to an Eagle Scout Award for union busting.