The Senate is now the hot place to gather the wealthy Republican elite to carry out their take over of the government. Heck, if you've already got corporate personhood on the done list, the rest should be a breeze.

Dumb Ron Johnson is the poster clown for the Senate. If he can marry into money and still pretend to be the self made Ayn Randian man, you're in.

What's funniest about the blurb below is how this wife made millionaire a is, according to Republicans, a "citizen legislator." Amazing? 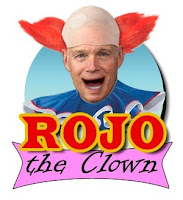 Republican Party of Texas is pleased to announce that we have confirmed United States Senator Ron Johnson of Wisconsin as one of our featured speakers at the 2012 Texas GOP Convention Gala Banquet … Senator Johnson went to Washington because the federal government is bankrupting America. He thinks it is important for citizen legislators to ally with those who are seriously facing that reality.