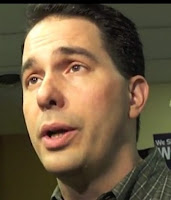 jsonline-Dan Bice: On May 5, 2010, Assistant District Attorney Bruce Landgraf filed a petition with court officials asking if his office could initiate a secret investigation into what happened with $11,000 in donations intended for Operation Freedom … By making it a secret John Doe investigation, Landgraf wrote that prosecutors might get better cooperation from Walker's office, which had been "unwilling or unable" to turn over records and information needed in the investigation. He said he would need to subpoena county records and officials. "It may be the County Executive's Office is reluctant to provide information to investigators due to a fear of political embarrassment," Landgraf wrote, noting that Walker was then running for governor.

It’s obvious that with a little time travel, and help from unionista's, Assistant DA Bruce Landgraf plotted to make Scott Walker look like a liar. No one is more honest than Scott. But have to hand to his crazy campaign firewall, Ciara, she’s unafraid to look the fool:

But Ciara Matthews, spokeswoman for the governor's recall campaign, said the filing was inaccurate. "Multiple follow-ups were made by the chief of staff to the district attorney's office to offer assistance in that investigation, and any statement to the contrary is not correct," Matthews said.


Like everything else, Walker peppers a little truth in his bigger lies:

Prosecutors have previously acknowledged that investigators met with Nardelli and another Walker aide in 2009 over Operation Freedom. But Landgraf's filing is the first public suggestion Walker's office later reversed course and quit cooperating. Landgraf said publicity about the probe, (it) could be "particularly unfair" to Walker.

Yeah, sounds like the guy was setting Walker up.