For the last year Scott Walker has talked up how positive business is about improved climate in the state. Still, Wisconsin has added fewer jobs than almost every other state in the country. Really, after a year and a half, he’s only come up with a possible 30,000 jobs? 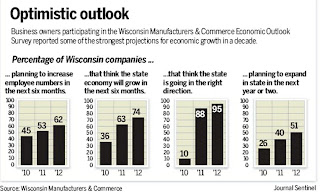 What’s not said is how that number could be more honestly attributed to the normal business cycle and the slowly improving recovery. If employers are positive, they can thank the Obama administration policies. Of course they won’t.

It’s no surprise than that the biggest Walker supporter and the voice of big business, Wisconsin Manufacturing and Commerce, would release another overly positive “feel good” survey of businesses that are promising jobs, jobs, jobs, just like a year ago. And we know how that turned out. This press release is so blatantly transparent, yet treated like it's actual news:

jsonline: Nearly two-thirds of employers, many of them manufacturing com­panies, plan to hire people in the next six months, a new survey from Wisconsin Manufacturers & Com­merce shows.

The 62% who said they plan to add employees is up from 53% a year ago … OEM Fabricators had a 75% sales increase in 2011 and expects similar growth this year. A year ago, it held a mock 'funer­al for the recession,' which public­ly proclaimed an end to hard times. 'Our customers are pushing us to take on more work, which is good. Everything in our portfolio has been strong.”

If what OEM is saying is true, than what they’re talking about is something Walker and the Republican legislature have never considered important; improving consumer demand. That's the real job creator.
Posted by John Peterson, Democurmudgeon at 5/31/2012 09:00:00 AM