And to think, she could have been the governor of California.

To hell with the American worker, just keep those jobs in China. That's what I call Republican job creation. 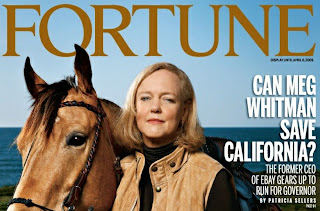 Hewlett-Packard’s chief executive, Meg Whitman, plans to cut 30,000 or more jobs next week, according to officials familiar with the plan. Her goal, they said Thursday, China, which is one of H.P.’s highest growth areas, will probably be spared, as will its research and development efforts.