Stand with Walker Taxpayers to give up $235 of their hard earned money to corporate tax cuts, possible state deficits.

Even though it looks like those "whiny" tantrumy Democratic protesters were right about the cost of Scott Walker's corporate tax cuts, you won't see one Republican voter change their mind. Even if it costs them their hard earned money. Staying true to the idea that every day is opposite day in Republican world, the Walker administration beat the phrase "we're doing it for the taxpayers" to death because it's not true. Add to the recall another reason to vote Walker out; future deficit widening policies.

I ran this story by my conservative, gun toting friend in Milwaukee, and he had no reaction. 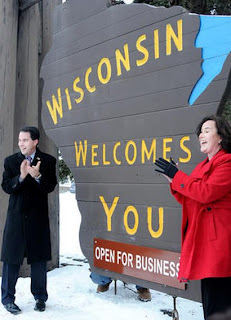 Cap Times/Mike Ivey: The Wisconsin Democracy Campaign is out with a new report detailing state budget policies that will benefit business, construction, real estate, transportation and other special interests at a cost to middle- and lower-income taxpayers.

On Wednesday, the cover story in The Capital Times will look at one of the biggest tax cuts for business -- a $130 million credit that effectively eliminates state income taxes for factory owners but not workers.

Meanwhile, groups benefiting from the new policies contributed $23.6 million in campaign contributions to various legislators, mostly to Walker and other Republicans, from 2009 through 2011.