Subway Gate ends where else, in Walker-sha County. Ryan and Romney Free Subs to Voters Okay.

Want to know how Republican law looks. Check out the following amazing justification for bribing voters with subs, a clear campaign violation. The DA actually said, "the fact that there appeared to be plenty of sandwiches left over reflects that it is unlikely that any significant number of uninvited members of the public helped themselves to free lunch." DA Brad Schimel can't be serious. 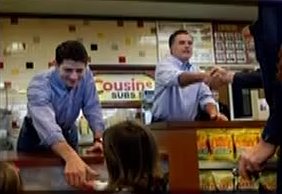 A video edited by the state Democratic Party shows Romney leading a rally and telling supporters to go vote, and, “If you want another sandwich, there are more back there.” State law prohibits offering something valued at more than $1 in exchange for a vote. However, in his decision, Schimel disagreed that it was election bribery:

“In his interactions with people in the sandwich line and during his speech, Governor Romney acknowledges the fact that it is likely that many present have already voted.  The candidate knows he is talking to a group that is politically involved, and are likely voters.  The encouragement to tell a friend can not be characterized as offensive to the law.

“In his speech, Governor Romney indicates that there were more sandwiches available.  The organizers paid for 100 sandwiches, but as they noted, less than 100 people attended the event. Event organizers concede that it is possible that an uninvited member of the public managed to obtain a free sandwich. However, the fact that there appeared to be plenty of sandwiches left over reflects that it is unlikely that any significant number of uninvited members of the public helped themselves to free lunch.  Even if they had, the evidence demonstrates that the intention of the organizers was only to provide lunch to invited volunteers and supporters.  Thus, no one who was not otherwise inclined to vote was intentionally offered any inducement to do so.”