First this: Ed Schultz mentioned today that a reporter asked Scott Walker if any of the jobs he created were in Milwaukee, which would basically kill his attacks on Barrett. Walker didn't know. A big mistake. Let's see if Barrett runs with this killer gaffe. It's a campaign gift. Now onto the rest of the story.


Manipulation of the jobs numbers can only go so far before people start to notice something is wrong, and guess what, someone noticed just how wrong: 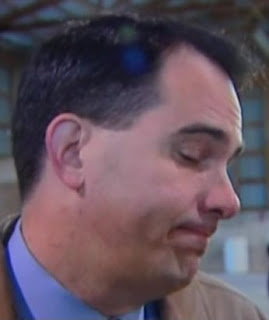 Washington Post’s Greg Sargent: Scott Walker’s extreme hypocrisy on Milwaukee jobs: One of Scott Walker’s primary arguments in the recall battle against Dem opponent Tom Barrett is that as Mayor of Milwaukee, Barrett presided over job losses But it turns out … in the first half of 2011, just after Walker took office, Milwaukee was adding jobs, along with the rest of the state — and the Walker administration rushed to take full credit for it.

“With four straight months of job growth in 2011, metro Milwaukee is reaping the economic benefits of Governor Walker’s successful efforts to improve Wisconsin’s business climate, and make job creation a top priority,” blared a Walker administration press release in May of 2011.

In other words, when Milwaukee was adding jobs early in Walker’s term, his policies deserved all the credit. When it began to lose jobs, it was the fault only of his opponent’s policies — even though the rest of the state lost jobs, too.