The Whole Truth about the Attack on Public Education. A Must Read.

The Jersey Jazzman related this back and forth between education historian Diane Ravitch and the Obama administration. Believe me, if you ever wanted to get caught up on where we headed thanks to privateers like Scott Walker, this is it. Hint; look what corporations did to wages and quality in manufacturing: 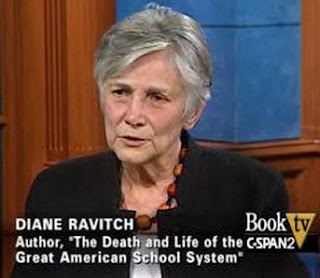 Weasel words are flying out of the Obama/Duncan Department of Education … Here's the story: First, Diane Ravitch tweeted the most important question right now in the education world: Who will transform education: entrepreneurs or educators? goo.gl/srER4

Really, sir? Perhaps, then, you can explain this, via Valerie Strauss?

The sad fact, of course, is that we educators have been almost completely left out of the debate … We are patronizingly told how important we are, then left to figure out how to teach in our underfunded classrooms, while the “very serious people” gather in wood-paneled rooms and figure out how to use bubble tests to screw us out of our workplace protections. Fortunately, Diane was not taking this garbage lying down:

@EDPressSec I have never met a teacher who looked for ways to make a buck off his/her students, like for-profit orgs now prowling for $.

Diane Ravitch sums it up with this logical and powerful warning to everyone:

My takeaway from our exchange: the US Department of Education welcomes for-profit entrepreneurs and will never turn its back on them, no matter how paltry their results or how constricted their definition of “education.” The advance of corporate greed into the education sector, in my view, has nothing to recommend it. Corporations will seek to replace teachers with computers, will shave costs wherever possible, and will deliver a product that is as cheaply produced as possible in order to maximize profits. I fail to understand what that has to do with education, as I understand the meaning of the term.-Diane