Paul Ryan tries “I know you are but what am I” on his Austerity Plan. Fail!!!

I’m really getting tired of conservative “projection” used as a campaign ploy to inoculate a candidates own positions from criticism. Saying someone else is doing what they are so plainly doing themselves, is crazy. 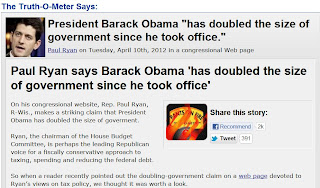 Paul Ryan is the king of cons. His universally panned plan of austerity, where he takes from the poor and middle class, refuses to increase taxes, and gives huge tax cuts to the wealthy, is the very definition of what Europe did and failed at. Not only did it result in a double dip recession, but politicians who supported squeezing the citizens instead of the banks, lost their jobs.

Seeing the writing on the wall, the king of cons is trying to define his critics as the ones promoting austerity, which not only defies logic, but also defies the truth. So which is it Paul, a failed Obama stimulus plan or a never mentioned and secret failed Obama austerity plan? Tax increases and spending don't sound like austerity to me, yet that's what Ryan is selling.

NewsOK: House Budget Committee Paul Ryan painted a stark choice facing American voters fall. "If you keep the way these entitlements work intact, with little changes here and there, and then more tax increases, you are just putting us on the European path to austerity," Ryan said of an Obama second term. "Those kinds of packages won't succeed in preventing a debt crisis. We'll pass one round of austerity, that won't work, then the bond markets will get us, then we'll do another round and another round, just like what Europe is going through now."