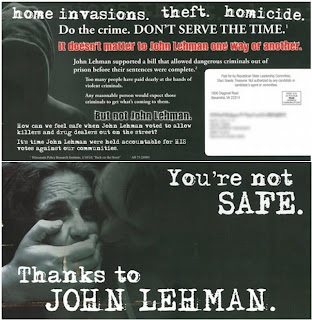 Sen. Van Wanggaard's recall race was a close one...until now. Check out the mailer to the right sent out about his opponent John Lehman. Nothing like a little race baiting:


Journal Times; The Racine branch of the National Association for the Advancement of Colored People says a Republican State Leadership Committee mailer attacking John Lehman is using race to play on people’s fear of crime. The two-sided ad, which a committee spokesman said was sent to 10,000 homes in the district, features two depictions of criminals. One side of the ad says “You’re not safe. Thanks to John Lehman,” and shows a shadowy photo of a what appears to be a white man attacking a light complected woman. The reverse side calls Lehman out for supporting legislation that allegedly “allowed dangerous criminals out of prison before their sentences were complete,” and bears an image of a hooded figure whose face cannot be seen.

It's not Wanggaard's campaign ad, but he agrees with it;


While Van Wanggaard's campaign didn't make the brochure, he agrees with the message. "You read the actual text, it's accurate.  John did support early release of criminal felons," said Van Wanggaard.

Forget about all the states that have saved money on the early release program of non-dangerous lawbreakers. It's been a nationwide successful story that has resulted in more money for states. But that's why Republicans like Wanggaard are bad a their jobs. Here's TMJ4 coverage:

That's not all folks. Check out the jaw dropping information below, about recalled Republican Senator Van Wanggaard. You may not know a lot about him. The shear breadth of Wanggaard’s hypocrisy, not to mention the voters that are willing to look the other way, makes him the quintessential Republican. I had to pass this shortened version along. There’s more here from the alluring Root River Siren: 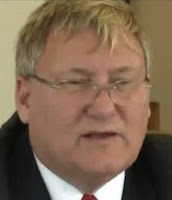 Root River Siren: Everyone in Racine knows about Van Wanggaard's pension. Oh yeah, they used to kill John Lehman for having a teacher's retirement and then getting paid as a Senator ... Then along came Van who didn't exactly retire as a cop - he got a disability - and then retired. Everyone shut up about the double dipping. Not a fucking peep.

Of course, Lehman supported public employees during his tenure as a State Representative and then as a Senator. Opponents said (and still do) he's a pet of the "union bosses."

Lehman has been criticized for cashing roughly $11,000 dollars from union organizations during the recall so far - an ironic criticism considering Wanggaard has cashed in a similar amount from conservative union types like the Milwaukee Police Association, steamfitters and Milwaukee Professional Firefighters.

However when the Racine Police Association declined to endorse Wanggaard in the recall and instead endorsed Lehman - a Democrat (a first in their history) that Wanggaard's duplicity as a former union representative turned union buster showed how deeply his actions hit home. It isn't just the locals who picked up on the hypocrisy of a guy who brings home about $90k each year of taxpayer dollars who unapologetically dismantled collective bargaining rights for public workers - rights that provided him the pension cash he gets every two weeks.

Longtime Wisconsin columnist, Bruce Murphy wrote about Wanggaard for his very first article this week in his "Murphy's Law" column in Urban Milwaukee. It's worth the read. The only shame is Murphy didn't touch on the $50,000 dollar settlement Wanggaard got from Safeco Insurance Company after his on-duty car accident...another harsh irony given the tort reform laws Wanggaard supported and voted for - making it much more difficult for injured citizens to sue in court.