Walker Worried about 30,000 or more attempts at Voter Fraud in Wisconsin Elections.

I've always like the edge David Weigel gives to his stuff, even if I sometimes don’t agree. Here, he does a little math about what it would take to swing an election with voter fraud. 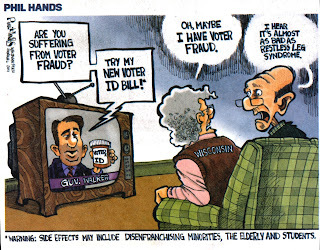 Slate: Scott Walker: Voter Fraud is Worth "One or Two Points" in Wisconsin: Wisconsin native Steve Hayes offers a long, empathetic take on Scott Walker's attempt to survive a recall election. The highlight: An interview with Walker … why are they so adamant about reversing a voter ID law?

Walker: "I’ve always thought in this state, close elections, presidential elections, it means you probably have to win with at least 53 percent of the vote to account for fraud. One or two points, potentially." That’s enough to change the outcome of the election. “Absolutely. I mean there’s no question why they went to court and fought [to undo] voter ID.”

So Weigel did the math:


The voter fraud issue was investigated in Wisconsin fairly recently, in the form of an Election Fraud Task Force and a deep dive into 2008's vote results. The yearlong investigation charged 20 people -- this in an election with around 3 million ballots. For fraud to equal "one or two points" in that election, you'd have needed 30,000-60,000 phony ballots. The proven fraud actually amounted to 0.0007 percent of all votes.

The people who oppose voter ID laws say they're doing it to rescue the votes of poor or elderly people who lack current IDs.

Students too. but 30,000 to 60,000 fraudulent votes? This is additional campaign ad material that will never be used Tom Barrett, or any of his fellow Democrats running in the recalls.

The Dems are horrible campaigners and fighters.