It appears Mayor Tom Barrett is shooting a lot straighter on the jobs numbers than Scott Walker. By the way, why isn't Barrett asking Walker how many of those new jobs were created in Milwaukee?


jsonline: But even when measured by the census, the instrument Walker favors, Wisconsin's recent economic performance, while better, is far from stellar. For September 2010 through September 2011 - the most recent year-over-year census data comparison available with all 50 states - Wisconsin ranks 26th, in the middle of the country as a whole and lagging behind its Midwestern neighbors.

For the period, which includes the last four months of former Gov. Jim Doyle's administration, the figures show Wisconsin added 36,561 jobs. During the same 12 months, Minnesota, with a labor force similar in size to Wisconsin, added more than 64,000.

"Even using his numbers," Barrett said of Walker, "we're at the bottom of the Big Ten."

Speaking of Ciara Matthews, check out this raw video clip where she appears to be hypnotically caught up in a strangely idiotic talking point stupor:


At Jezebel.com, they wrote this about Scott Walker and Ciara Matthews: 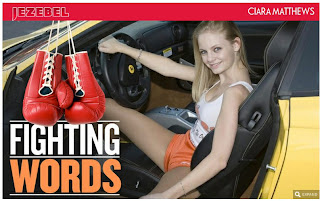 In case you haven't noticed, Wisconsin's been fraught with untenable political tumultuousness since one-man Human Centipede Scott Walker was elected governor. He's bullied teachers, attacked gay couples' hospital visitation rights, signed a repeal of Wisconsin's equal pay law, and rolled back sex education to an innocent time when kids thought storks brought babies. But get ready for more high octane Crazy from the Arizona of the midwest — the communication coordinator for the embattled governor's impending recall election is a charming, colorful former Hooters waitress who would just love to have the opportunity to punch Hillary Clinton in the face.

Meet Ciara Matthews. According to AlterNet, she's a Republican attack dog type who has worked on the campaigns of such charming politicians as Sharron "When Life Gives You Lemons, Just Make Rape Lemonade" Angle and Nevada gubernatorial candidate Bob Beers. She'll be directing the tone of Walker's bid to avoid being recalled by a state full of people who don't like him.

And if past performance is indicative of future fun, the people of Wisconsin are in for a real treat. In the run up to the last Presidential election, Matthews maintained a blog that she's since deleted (but we've got screenshots) brimming with nutbaggery and, for a communications director, surprisingly inept attempts at coherent communication. From an entry entitled "A LETTER TO PLANNED PARENTHOOD,"


"You are advocating murder and one day Roe v. Wade will be overturned thanks to George W. Bush and the justices he put in the Supreme Court. The actions of Planned Parenthood and disgusting and I am sickened that my tax dollars are used to fund the immoral killing of innocent human babies!"

…profiting from selling a plasticized form of unnatural sexiness designed to arouse men while simultaneously believing that women should be forced to face the "consequences" of actually giving into to their sexual desires is a pretty backward way of thinking.