According to Market Watch: 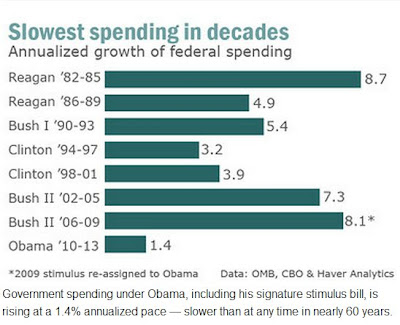 Obama's campaign is out now smashing the now commonly accepted myth that he's spending us into oblivion. It's the end of our country. But..well, I guess not.


Although there was a big stimulus bill under Obama, federal spending is rising at the slowest pace since Dwight Eisenhower brought the Korean War to an end in the 1950s.

Even hapless Herbert Hoover managed to increase spending more than Obama has.

In the 2009 fiscal year — the last of George W. Bush’s presidency — federal spending rose by 17.9% from $2.98 trillion to $3.52 trillion. Check the official numbers at the Office of Management and Budget. Over Obama’s four budget years, federal spending is on track to rise from $3.52 trillion to $3.58 trillion, an annualized increase of just 0.4%. There has been no huge increase in spending under the current president, despite what you hear.

I heard this on Randi Rhodes show today, where Lou Dobbs actually read the above exactly as written, "although there was a big stimulus," but went on to say the story didn't include..the stimulus.